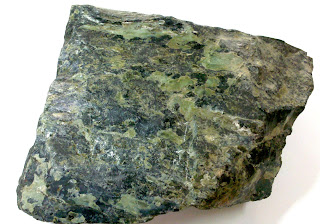 Serpentine is not a mineral, it is a group of 20 minerals that are all related chemically and structurally, all being silicate minerals.  Serpentine minerals have gotten a bad rap lately by politicians because they form fibrous minerals referred to as asbestos.  Asbestos is a house-hold word with a bad connotation.   The word asbestos describes minerals that can be pulled apart in parallel, lengthwise, flexible fibers. Asbestos minerals have had been used in industrial applications for a number of different things.
Despite being a very important economic mineral, it has become the target of some California politicians who have characterized it as toxic.  They were trying to get serpentine removed from the records as California’s State Rock.  This is being done out of fear more than education.  Of the 20 or so asbestos minerals, only a few produce a fiber that are actually dangerous to humans.
California politicians have made a crucial error in their rational.  Serpentine doesn’t always contain asbestos minerals and many of the ones it does are not harmful.  Even when serpentine does contain harmful fibers, the amount of danger it poses is dependent on many factors include how it is released from the host rock, bioavailability,  length of the fibers, whether the host is a smoker, and the degree of exposure.  With all the factors, it is not hard to realize serpentine is a safe rock to have around.  Nor is serpentine is not toxic as they claimed. Once more of the politicians were educated, the bill was left to die with little fan fare.

Posted by McElwain Family at 12:20 PM

We take guided tours out to collect rocks, minerals and fossils from private mines and claims not open to the general public!

Get your witch hat ready and join the spooktacular good time with our first ever Crystal Festival Crystal Hallow! We will have vendors, classes, readings, and trick-or-treating for the kids! October 6th and 7th, 2017! Find out more at www.crystalfestival.com

We Sell On Etsy